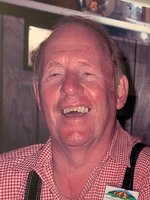 Karlheinz “Hoagie” Guckert passed away peacefully on Sunday, July 25, 2021. Hoagie was born on August 5, 1939 in Mannheim, Germany where he lived until immigrating to the United States in December of 1956. In 1963 Hoagie answered the call from Uncle Sam to join the U.S. Army where he went on to play soccer for the International Military Sports Council in Europe. He later played center forward for the United German Hungarian team that won the U.S. National Amateur Cup in 1965. Hoagie and is beloved wife Kathleen (nee Ehling) were married for 53 years. In addition to his wife, he is survived by daughter Dana Pico (Christopher Pico) and grandchildren Madison, Ryan, and Kevin and son Brian (Mary Theobald) and grandchildren Lily, Harrison, and Charlotte. In 2002 Hoagie retired from Laneko Engineering in Fort Washington where he had worked as a machinist for 37 years. Fortunately, he was then able to spend the next 15 years with his wife Kathleen living in Florida and Pennsylvania before being struck down by the evils of dementia. Relatives and friends may greet the family on Friday, July 30th from 10 AM to 11 AM at St. Catherine of Siena Church, 321 Witmer Road, in Horsham. Mass will be celebrated at 11 AM. Interment will follow at Lawnview Cemetery, Huntingdon Pike, Rockledge, PA. In lieu of flowers, memorial donations may be made to the Alzheimers Foundation of America: alzfdn.org.