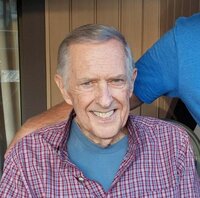 John R. Lambert, Jr. ’Jack’ , formerly of Warrington, PA passed away peacefully on October 21, 2021 at Doylestown Hospital. He was 86 years old. Born in Philadelphia, Jack was the son of John Sr. and Marian (nee Candy) Lambert. Jack was a proud veteran of the U.S. Air Force as an Airman 2nd Class from 1957 to 1962. He then worked as an Interior designer for Smith Kline until his retirement in 1986. After his retirement he held many part time jobs to keep himself occupied. In his free time, he enjoyed traveling to California and France to visit relatives. He was always known as a jokester with a dry sense of humor. John is survived by his sister, Elizabeth Reice, of Gilbertsville, three children Marc Lambert, Christopher John (Brenda Wilt) Lambert, Tracy Monique Lambert and two grandchildren, Ashley Monique Appleton and Logan Vannoy. He was preceded by his loving wife of 60 years, Nicole “Nicky” Lambert, in July of 2020, whom he had met while serving in the Air Force and stationed in France. Jack’s Funeral will be held on Saturday, October 30, 2021 at Louis Swift Plunkett Funeral Home. Relatives and friends are invited to pay their respects to the family, after 9:00 a.m. The Eulogy by the family will start at 10:00 a.m. Interment will follow at Whitemarsh Memorial Park. In lieu of flowers, donations to American Cancer Society,1818 Market St., Suite 280, Philadelphia, PA 19103, would be appreciated by the family.