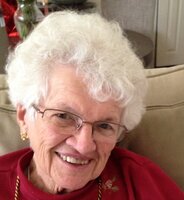 SERVICES HAVE BEEN POSTPONED DUE TO COVID AND WILL BE RE-SCHEDULED THIS SPRING. PLEASE CHECK THE WEBSITE AT THAT TIME FOR AN UPDATED SCHEDULE. Margaret D. Tiller passed away into the arms of the Lord on December 12, 2021. She was the daughter of Albert and Henrietta James and was born in Philadelphia in July 1925. She was preceded in death by her husband Samuel and her grandson Scott Gibbs. She is survived by her sons Gary (Maggie) and David (Sandie) as well as her daughter Marilyn Gibbs (Bill). She is also survived by nine grandchildren and 15 great grandchildren. Margaret was a graduate of Kensington Girls High School in 1943. Upon graduation she went to work at Cramps Shipyard in Philadelphia during WWII. She worked many jobs in her career eventually retiring from Fisher and Porter in Warminster She met the love of her life, Sam, in 1947, was married in October 1948, moved to Hatboro in 1953 and they began attending and became members of Lehman Methodist church. . She was an active participant in Hatboro Little League, was a Cub Scout den mother and volunteer for many community and church functions. Margaret was a devout Christian and lived her faith on a daily basis. She opened up her home to friends and relatives that either visited Hatboro or needed a place to stay due to hardship. She was a pillar of good in her neighborhood and became “Nana” to all. Her loving nature and ability to laugh (especially at herself) carried her through many trying times and stayed with her even when her health started to deteriorate. She will be very much missed by everyone that had the pleasure of experiencing the joy that she exuded each and every day. In lieu of flowers the family requests donations in Margaret's name be made to Hatboro Little League. The family wishes to thank the wonderful aides with Visiting Angels as well as the attending nurses from Bayada that helped Mom get to the end. Mom loved each and everyone of you.