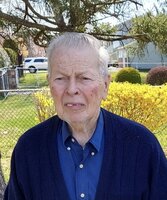 Harry C. Neiley of Warminster passed away peacefully on Monday, May 16, 2022.  He was 89.  He was the loving husband of Nettie (nee Sorokolet) for over 62 years. In addition to his wife, Harry leaves behind his children Harry J. and Donna M. Neiley. He is also survived by his three grandchildren, Eric, Kevin and Bridget as well as his brother Charles (Karen) and sister Frances Chirillo (Larry).

Harry served his country in the US Army. He was a dog lover, classic movie enthusiast and a lifelong fan of Philadelphia sports teams. He enjoyed trips to the Jersey shore and the western USA, particularly Las Vegas. His greatest source of joy was his family.  He was an avid supporter of his children’s and grandchildren’s interests and immensely proud of their athletic, academic and career achievements.